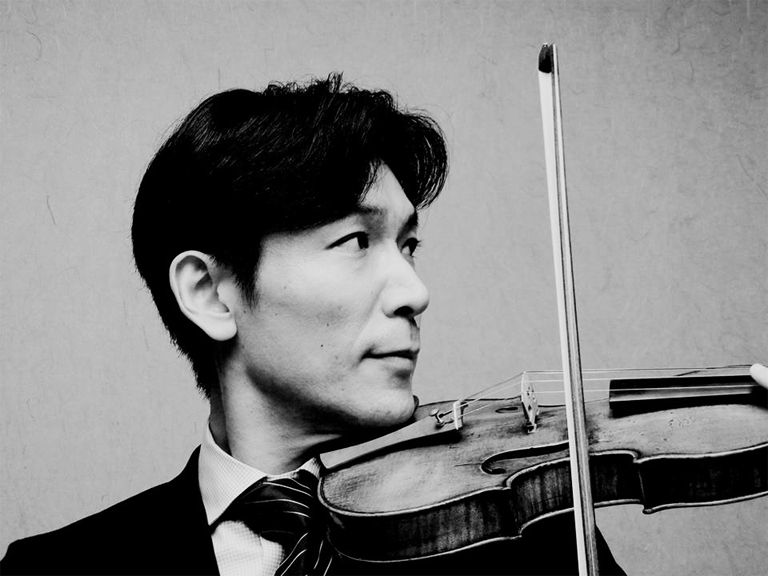 Eijin Nimura has established a brilliant career as a violinist, performing concertos with leading orchestras both at home and abroad over the years; at the same time, as an “UNESCO Artist for Peace”, he is actively engaged in efforts that contribute to society through music.

Eijin Nimura was born in Tokyo and started playing the violin at the age of four. On the advice of a great violinist Isaac Stern, he spent every summer during the age of nine to sixteen visiting the United States to receive private tuition from Dorothy DeLay of the Julliard School. When he was eleven years old, he won praise from the renowned conductor Eugene Ormandy who expressed high hopes for his future. Nimura graduated from the Tokyo University of the Arts, after attending the Senior High School of Music attached to the Faculty of Music. Having won a number of music competitions from childhood, he came second at the 1994 Paganini International Competition and was awarded the first prize at the 1995 International Music Competition of Japan. He was the recipient of the Idemitsu Music Award in 1996.

1996 was also the year that he launched his career, performing mostly outside of Japan. He has received acclaim for his performances at the major concert halls in Europe. Throughout his performing career, Eijin Nimura has also been a regular performer at charity concerts. In recognition of his numerous social activities, such as the donation of many artificial limbs to rehabilitation centres established in Bosnia-Herzegovina after the conflict in the region, he was appointed “UNESCO Artist for Peace” by the United Nations Educational, Scientific and Cultural Organization in 1998, the first Japanese to be chosen. He has subsequently given performances in Sarajevo, as well as areas such as Kosovo and Palestinian Authority. His activities were featured in a documentary “What Music Can Do – Violinist Eijin Nimura” broadcast in 2000 on NHK General TV, the main channel for NHK (Japan Broadcasting Corporation); a two hour documentary series was broadcast over three consecutive nights on NHK BS2. He has been featured extensively in the media such as television and magazines. Nimura has appeared in KDD’s television commercial “Project 001 – Prague”. Television appearances include well known programmes in Japan such as the talk shows “Tetsuko’s Room” and “Hello from Studio Park” . He has appeared on the news programme “Tetsuya Chikushi’s News 23” and the long running classical music programme “Untitled Concert” . Examples of other major television appearances include the award-winning documentary “Sealed Melody” broadcast on BS-i and he performed the main and closing theme tunes for the NHK drama series “Dreaming Grapes” . In 2004, he was chosen by the magazine “Newsweek” as 100 Japanese respected from all over the world.
Nimura has released a number of CDs for Sony Classical including “What Music Can Do” (Ongaku ni dekirukoto) , “From the Past to the Present” (Toki wo koete) and “Scarlet Melody” , the last of which was in collaboration with the U.K.’s Royal Philharmonic Orchestra.

Since 2011, he has been actively performing all over Japan in support as the Great East Japan Earthquake Relief Fund and Kumamoto Earthquake Relief Fund established by the National Federation of UNESCO Associations in Japan. Other additional supports are ongoing for the victims of earthquakes from all over the world such as Indonesia, Nepal and Italy etc.
In November 2012, he was conferred the title of “Goodwill Ambassador for artistic efforts to promote peace around the world” by the Embassy of Israel in Japan at the concert for the 60th Anniversary of diplomatic relations between Israel and Japan, for contribution to musical projects for peace in the Middle East, research of music composed in concentration camps during the Holocaust.
On the occasion of the 70th anniversary of UNESCO in 2015, he was commissioned by the UNESCO Headquarters in Paris to be held as the symbolic events in Japan, he carried out “Prayer for Peace Concert in 70 years from the bombings and UNESCO 70th Anniversary” at Urakami Cathedral in Nagasaki under the patronage of UNESCO, related ministries of Japan in September. Besides, he got applause from a large number of government agencies to make the concert “Nimura Project” successful in the “UNESCO Youth Forum” dispatched from the governments of 195 countries at the UNESCO Headquarters in October of that year.
In March 2018, Nimura was invited to give performances at the “True Colours” Asia-Pacific Festival for Artistes with Disabilities held in Singapore co-organized by UNESCO and the Nippon Foundation. Also he was invited to perform in the commemorative event at the UNESCO Headquarters on the International Day of Persons with Disabilities in December of that year.